Our services are used by 700+ companies
We have installed over 9,000 devices
Special solutions based on the clients’ needs

The user can define specific areas on the map and learn, from the corresponding geofence reports, when its vehicles entered and left those areas and how long they stayed there.

An international hauling company needs to know how much time its vehicles have spent in Germany. Why? The EU’s regulations require drivers to be paid the German minimum wage for the time spent in Germany. Similar rules are about to enter into force in France and Austria. Countries that have higher salaries use such measures to protect their domestic market from being invaded by East European hauling companies. The hauling company must produce proof that the driver’s salary has been calculated as required. A geofence report can generate such proof in less than half a minute.

The reports created with respect to the period defined by the hauling company provide the precise number of visits by each truck, as well as the time and duration of loading.

A property maintenance company is hired to clear snow from various business premises. The agreements stipulate an hourly rate for the service, which must be performed without notification whenever a snow cover is present. It would be highly cumbersome for the company to manually record the entry and exit times and hours worked on the various premises.

The snow clearing operator creates geofences along the boundaries of the premises to be cleared. This will do away with tedious and time-consuming paperwork and timesheets. Precise billing data are generated in less than half a minute and the geofence report provides a record of the hours worked on each customer’s premises. 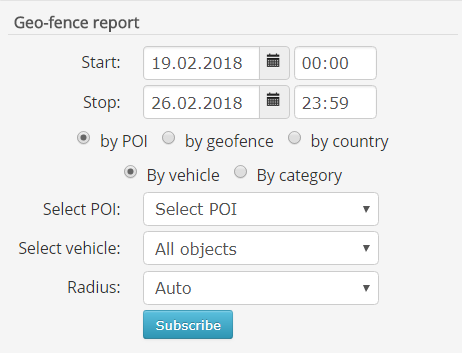 The serviced locations of a client can also be marked on the map as points of interest (POI). When the POI is assigned a radius, the software regards it as a geofence with the corresponding circumference. As a result, the system generates a geofence report that states precise service duration at the location, as well as the times of arrival and departure.